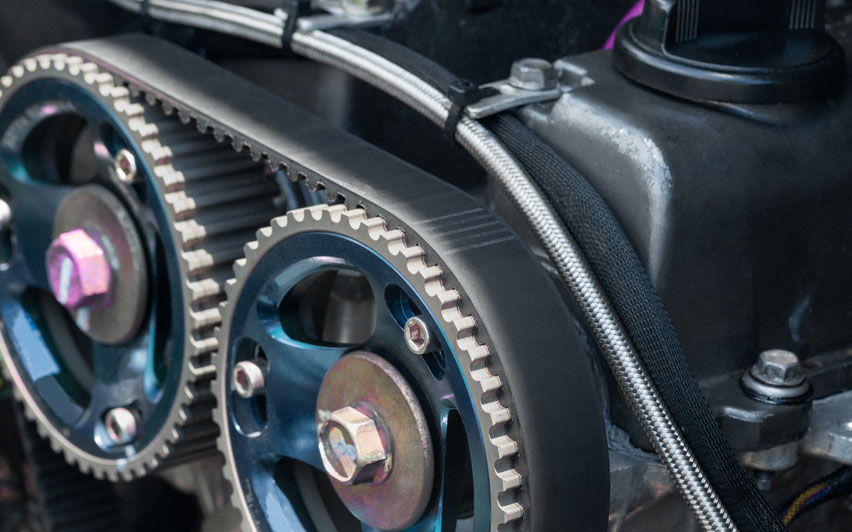 Timing belts or chains can break with little or no warning, leaving you with a blown engine that will cost thousands of dollars to rebuild.

Your engine is made up of parts. Some of them are static, just sitting there; like the oil pan. Other parts move. Fast. Really, really fast. It is absolutely essential that those moving parts not run into each other.

Over the years, engineers have tried a number of approaches to resolving this problem, most of them involving gears (a few cars, like the VW Beetle still use timing gears). In 1945, the first experimental timing chain appeared. It was a step forward, but it wasn't until the mid 1960s that the first American-made car (Pontiac Tempest) rolled off the production lines sporting a timing chain. Timing chains and gears are made of metal and are generally seen as more durable than rubber timing belts, but timing belts are less expensive, quieter and more efficient mechanically because of their lighter weight.

So what does the timing gear/chain/belt actually do? It acts as a sort of traffic-cop, making sure that all the moving parts don't slam into each other. When those parts collide, the result is always very expensive.

Timing belts are usually accessable can be inspected visually. Timing chains and gears are inside the engine and can't be inspected at all. Reduced engine power and poor economy, intermittent back-fire, as well as a rattling noise from the front of the engine, may indicate failure is about to occur, but there may be no warning at all. For this reason, auto manufacturers recommend replacement at specific mileage interveals (just give us a call and we'll be glad to let you know when your car is due). When the timing belt or timing chain is due to be replaced, it's usually a very good idea to include replacement of the water pump in the repair, since it will have to be removed anyway and the only additional cost will be the parts.